All Collections
Analyses
Analyses on One Codex
Panels

In many situations you can learn something useful about a sample by detecting a set of specific genetic markers, which can be whole genes, gene regions, or single SNPs. Panels characterize specific genes or SNPs with known functions:

We analyze panels by comparing every read or contig in a sample against the set of genetic markers that make up the panel. 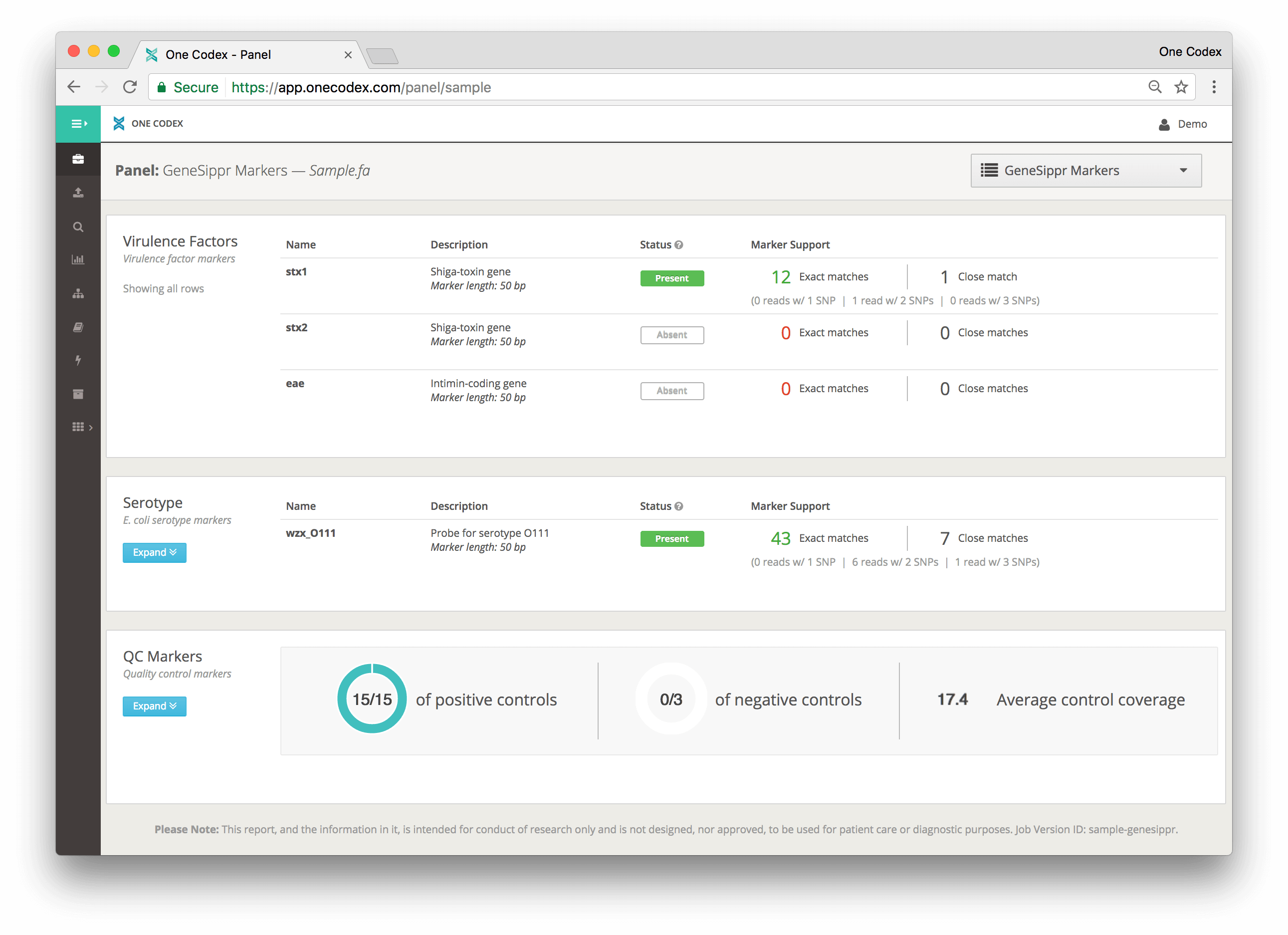 Short markers (e.g., 20-50bp) are summarized with the number of exact or partial matches to the reference sequence, which helps with detecting specific SNPs. Longer markers (100bp - 5kb) are summarized by the amount of the marker that was covered by reads in the sample ('coverage'), the proportion of bases that matched the reference ('percent identity'), and the average number of reads piled up across the entire gene ('depth').

Panels on One Codex

The GeneSippr Panel was developed using markers identified by Lambert, et al. (2015) for the purpose of rapidly detecting Shiga toxin-producing E. coli (STEC). This panel detects the stx1 and stx2 markers for Shiga toxin, as well as the Intimin virulence factor (eae), and a set of serotypes that have been associated with pathogenesis. A set of QC markers are also included that measure depth and coverage of the core E. coli genome. Read the publication, or look at an example for more details.

The Campylobacter AMR Panel uses a set of genes that were identified by a group of researchers that analyzed 114 Campylobacter isolates for resistance to a set of nine different antimicrobials. They identified 18 resistance genes and mutations in two housekeeping genes that predicted phenotypic resistance with 99.2% overall accuracy. See our blog post for more.

The E. coli AMR Panel uses a set of genes that were identified by a group of researchers that analyzed the antimicrobial resistance profile of 76 isolates of E. coli. They identified a set of 30 genes and mutations that predicted resistance and susceptibility with 97.8% specificity and 99.6% sensitivity to the identified phenotypes.

The B. anthracis Detection Panel was developed in order to sensitively detect this dangerous pathogen from complex metagenomic samples, while being careful to avoid false positives that may result from other Bacilli being present in the mixture. You can read a summary of the panel on our blog post, and you can find a more detailed description of what went into making the panel here.