All Collections
Introduction to the Microbiome
Beta Diversity

An introduction to Beta Diversity, and some of the common ways to measure it.

Beta diversity is a term used to express the differences between samples or environments. It is very often used in microbiome studies to help researchers see whether there are major differences between two groups, such as treatment and control groups. There are many ways of measuring beta diversity, as well as a number of ways to visualize and represent those differences. We'll walk you through some of the most commonly-used metrics and representations, to help you interpret your results. We'll use this example to describe the metrics: 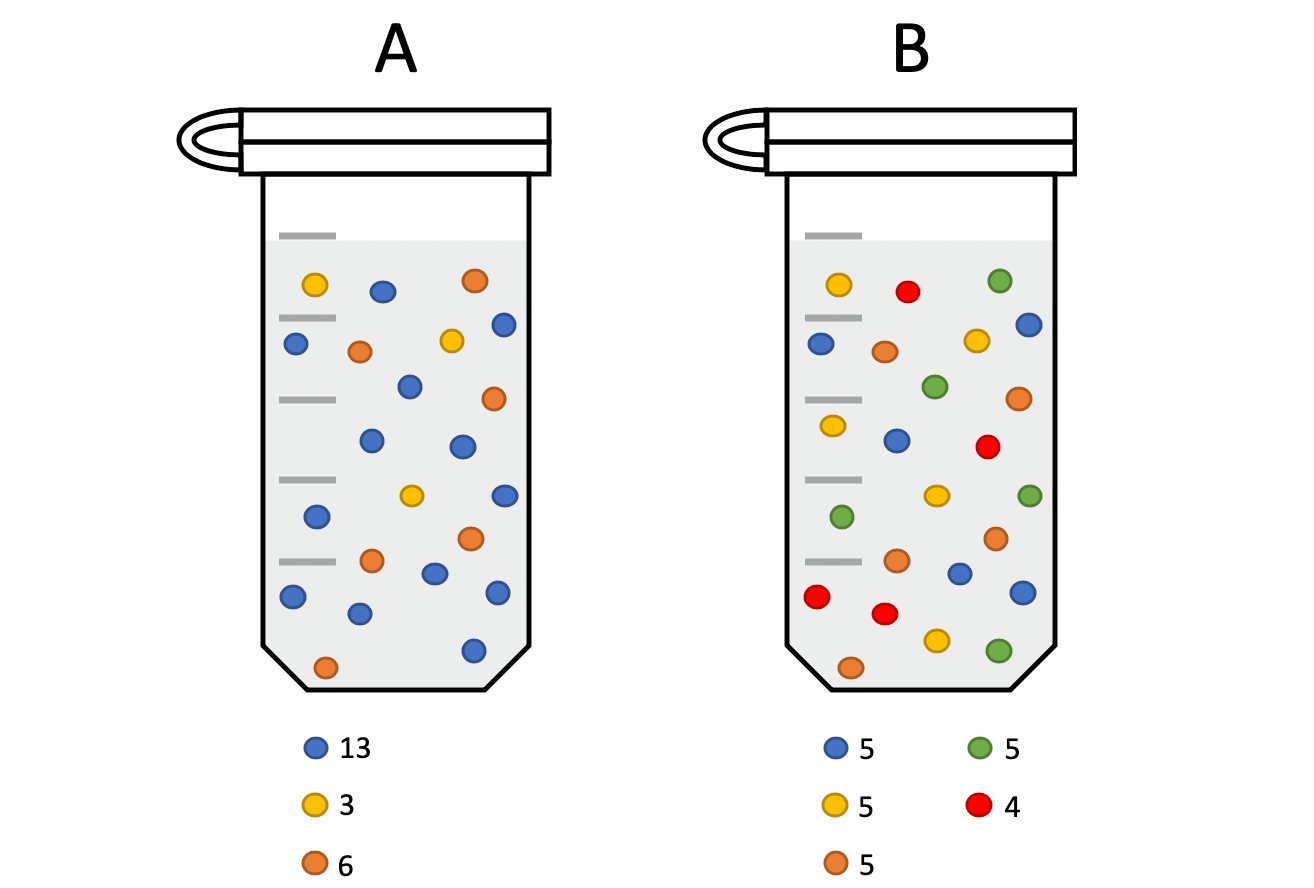 Bray-Curtis dissimilarity is calculated as:

In our example above the blue, yellow, and orange species are shared between the two samples. To calculate Cij, we sum up the lesser of those species.

This is a commonly-used metric, as the bounded scale (i.e. 0 - 1) allows for an immediate and simplified idea of the similarity between the two samples. One thing to keep in mind, however, is that the bounded scale can result in amplified or contracted differences, depending on the number of microbes in the samples. For instance, if you have a pair of samples with very few microbes in each, any small changes in abundance will have a large affect on the Bray-Curtis dissimilarity. If, however, you have two samples with large numbers of species, similar changes in abundance would have less of an impact on the overall score. So it is good to consider alpha diversity as a possible driver in dissimilarity.

In our example, Jaccard distance would be calculated as:

City Block distance has multiple names, including Manhattan Distance and Taxicab distance [3]. It's so-named because the metric involves adding up the absolute differences of Cartesian coordinates. Imagine how a taxi drives through Manhattan. It must take multiple turns to get from point A to point B, diagonally across the city. This is how City Block distance works. It adds all of the incremental distances between each turn.

In our example, we can calculate the city block distance as:

Unweighted UniFrac is the fraction of branch lengths between all microbes in both samples that is different (unshared) between the samples.

Weighted UniFrac [5] follows the same logic as Unweighted UniFrac, but also takes the abundances of microbes in the samples into account.

When we take a sample from an environment, we only obtain a proportion of what is there. Each processing step takes a smaller subset of what we obtained in the preceding step. And as the sequencers are limited to an estimated number of possible DNA strands, what we observe per species is only a proportion of what the sequencer was capable of producing for this sample. We therefore need to treat microbiome data as proportional, or compositional [7].

As such, some microbiome researchers have started to incorporate Aitchison Distance into their studies. The first step involves normalizing the read counts using centered log-ratio (clr) transformations. These normalized counts can now be treated with statistical approaches that are designed for data in Euclidean space. Aitchison distance is the application of Euclidean distance to clr-transformed data. The clr-transformation for species 1 - n in sample x is performed as:

Aitchison distance between samples x and y is therefore calculated as:

Applying any of the above metrics to a set of n samples returns a symmetrical distance matrix of size n x n. It's difficult to get a sense of the population-wide differences from a table like this, so there are a number of ways to visualize these results to make these differences a little clearer. 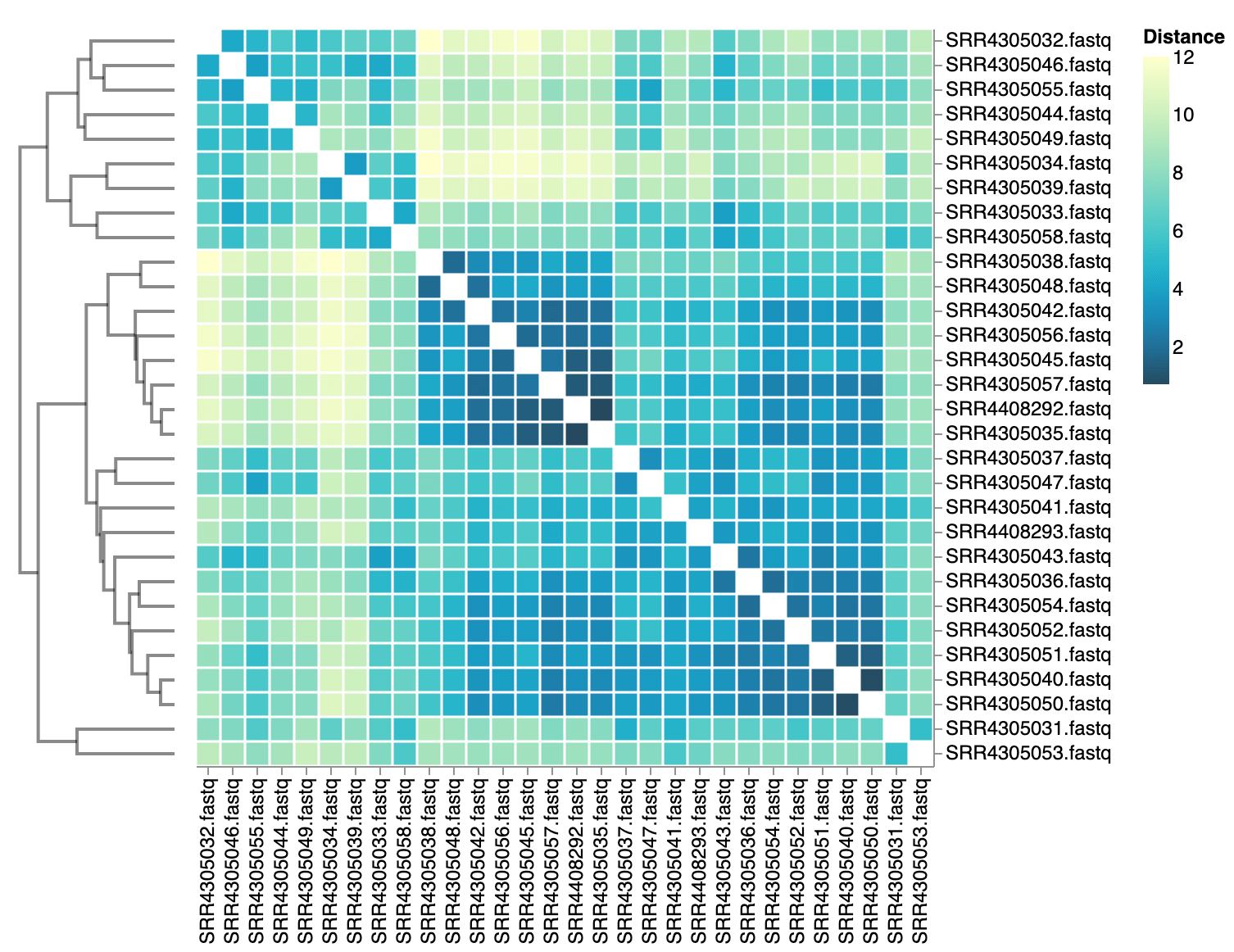 While heat maps give a quick view of how close or distance pairs of samples are, we often want to see how the different clusters relate to one another, and if our metadata is driving those differences. But when you have many samples, this becomes difficult to do.

Imagine the case where you have two samples. You can represent the distance between these two samples with a line, where the length of that line indicates distance. This means we require 1 dimension to view the relationship between 2 samples. Now imagine you have a third sample. You can present the differences between three samples with a triangle, or 2 dimensional plot. If you add a fourth sample, you now need a third dimension to capture all of the distances between all samples. The more samples you have (n), the more dimensions you need (n-1) to fully capture all of the distances between all pairs. Our brains can't really comprehend too many dimensions!

Multi-dimensional scaling (MDS) helps us to work with many samples at once, by using algorithms to allow us to maintain a view of the distances between samples as much as possible, in a reduced number of dimensions. The dimensions are usually sorted in order of how much of the variance they explain, where dimension 1 explains more variance between all samples than dimension 2 and so on. For this reason, we tend to plot just 2-3 dimensions, depending on how much of the variance is explained by these first few dimensions alone.

Below are just a few ways of plotting data like this.

Principal Component Analysis works by finding the best-fit line between all of your data points in multi-dimensional space - i.e. the line that minimizes the squared distance from each point to the line. This line, or vector, is your first component. You can think of this as a combination of variables (for instance, microbes and their abundances) that explain the maximum amount of difference between your samples. That amount of difference is your eigenvalue. By rotating and stretching your data in many different directions, PCA finds the next best-fit lines or eigenvectors, until all variance between your points can be explained. 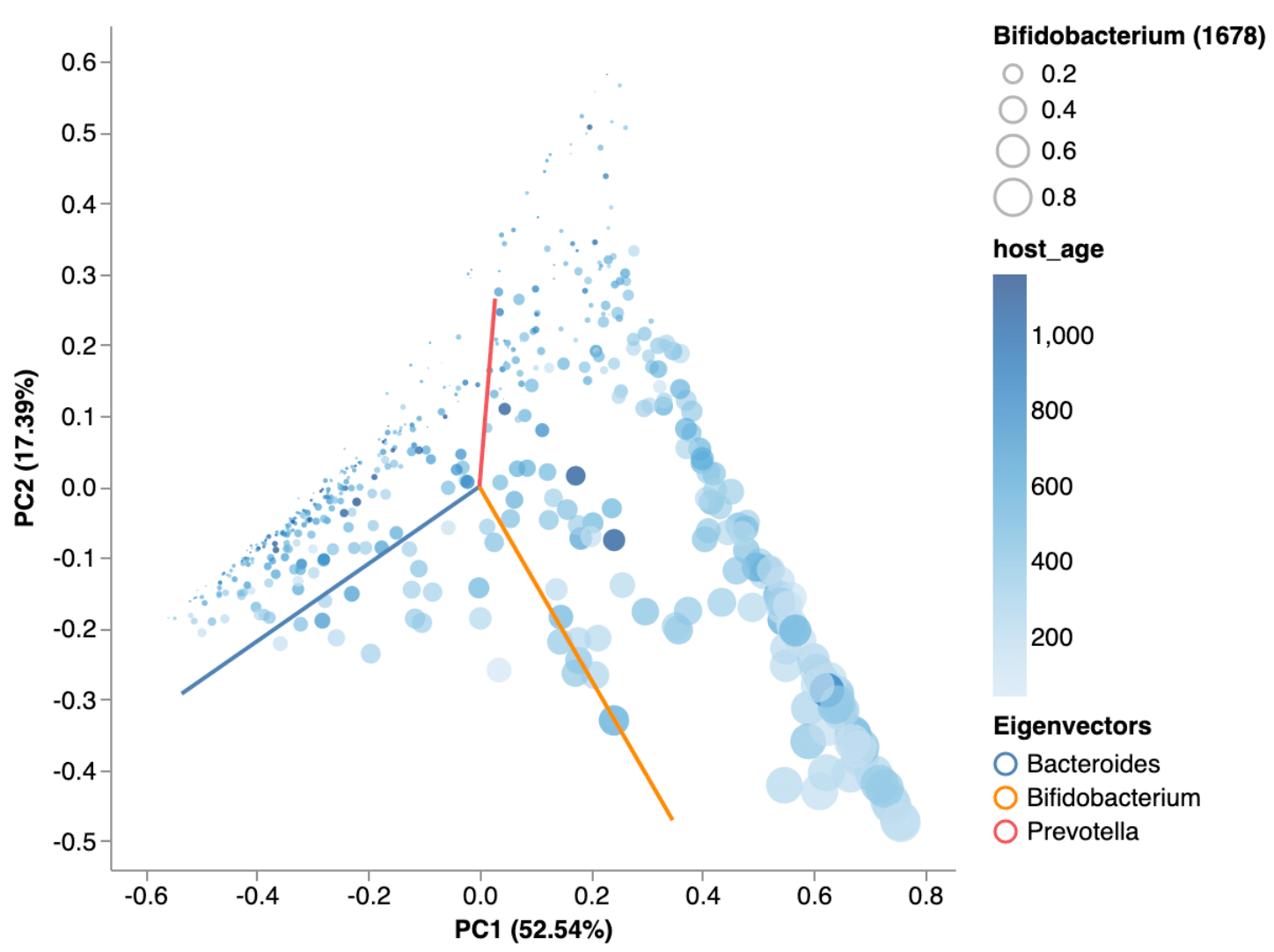 Another commonly-used MDS approach is Principal Coordinates Analysis (PCoA), also known as classical multidimensional scaling. It relies on eigenvalue decomposition in its calculations.

We've made example data available in our blog post, and here, where we've plotted the first two principal coordinates for infant microbiome data from an auto-immunity study. Samples are colored by country, and you'll see that PC1 explains 50.37% of the variance between all samples, whereas PC2 explains a further 15.01% of the variance. 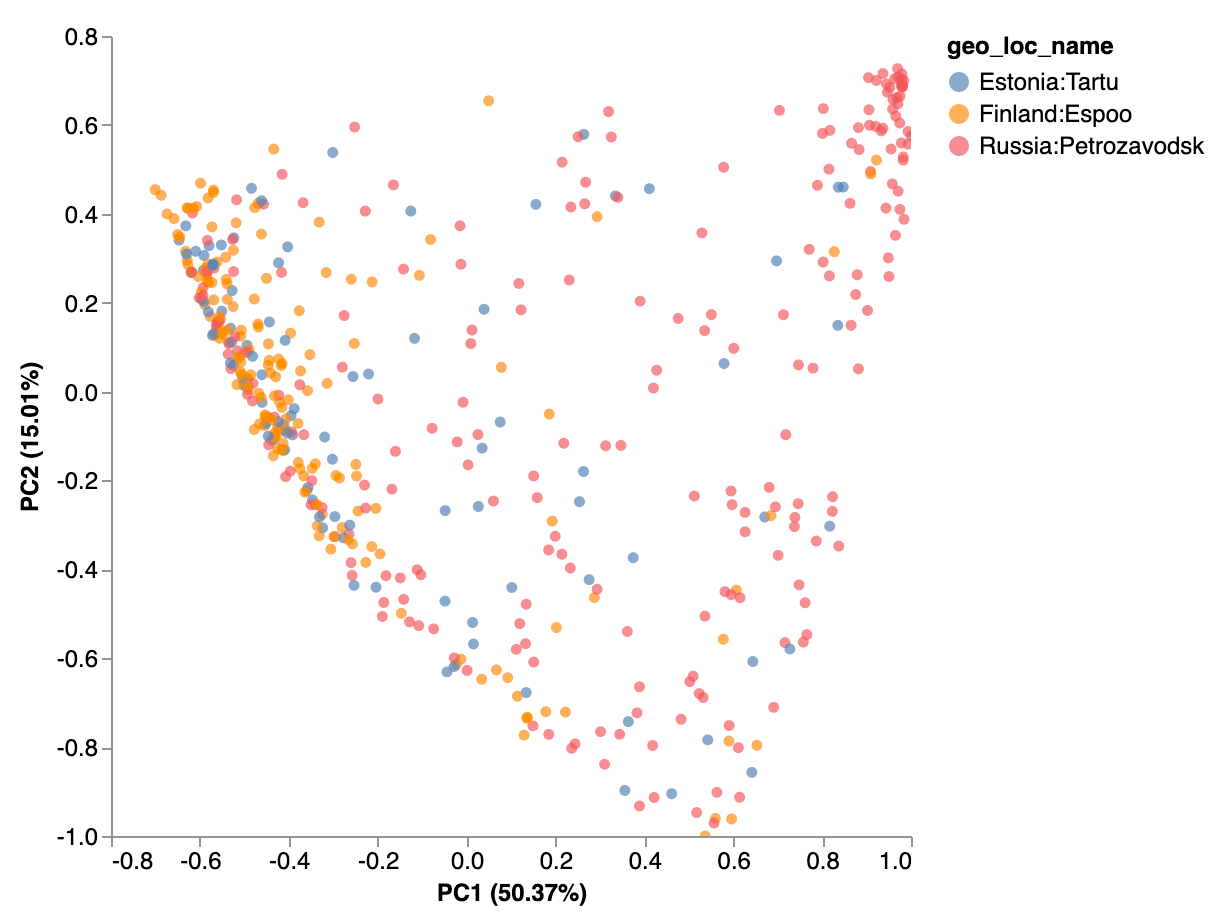 What's the difference between PCA and PCoA?

A question we often see! There are a couple of points to note:

SMACOF is another MDS approach. It calculates "stress" - a function assessing the squared differences between ideal distances and actual distances. "Stress" is minimized using an iterative majorization function. This results in a plot where closely related samples are plotted near to one another.

To calculate a beta diversity matrix for your samples, you just need to call the following.

The available metrics with this command include braycurtis, jaccard, and cityblock. By default, these analyses are performed on the abundances of species in your samples. However you can choose to change the taxonomic rank by adding the below parameter.

UniFrac distances can be calculated using a separate command, as it takes the taxonomic tree into account.

This allows you to choose weighted or unweighted (with weighted=False ), and as with the above beta_diversity command, you have the option to choose a taxonomic rank, or default to species abundances.

We've also made a number of functions available in our python library to allow you to visualize your beta diversity results.

Here, you have the metric choices of braycurtis , cityblock (or the interchangeable manhatten ), jaccard , unifrac (which represents

As with the above commands, you can also choose the taxonomic rank. An additional option allows you to choose the linkage used for the hierarchical clustering.

The default linkage is average , however single , complete , weighted ,

PCoA plots (and smacof plots, with method='smacof' ) are available through the

plot_mds command. The same metric and rank options are available for this.

PCA plots have their own command, with additional options.

You'll see an example in our Advanced Tutorial Notebook and below, where we colored the samples by geographical location, we adjusted the point sizes by abundance of Bacteroides, and included the abundance of Firmicutes in the hover metadata. 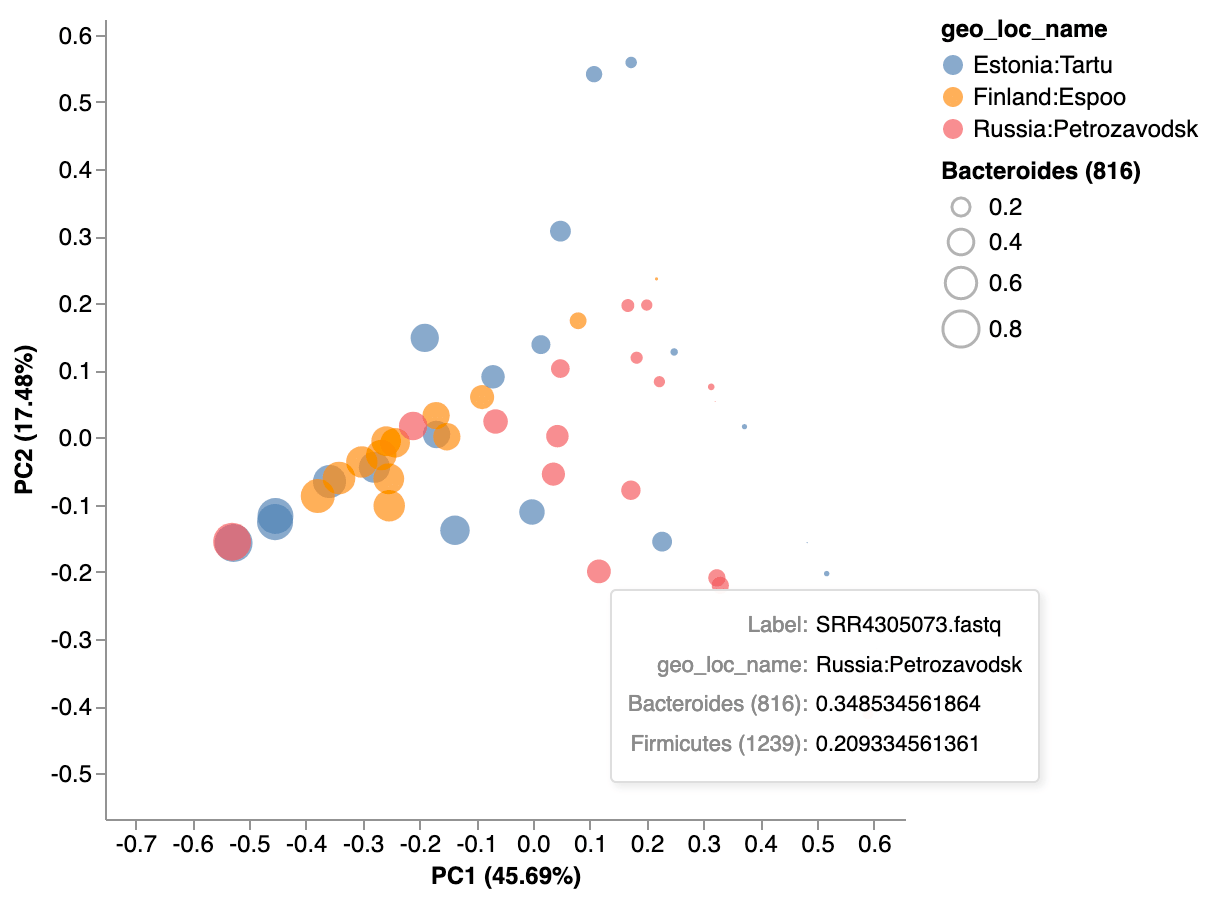 Explore using notebooks on our platform to generate the results and plots you're interested in. Here's a handy place to get started!