All Collections
Introduction to the Microbiome
Alpha Diversity

Alpha diversity is a term used to describe the "within-sample" diversity. It's a measure of how diverse a single sample is, usually taking into account the number of different species observed. Alpha diversity metrics are also often weighted by the abundances at which the individual microbes are observed. There are a number of commonly-used metrics to measure alpha diversity. We'll use these mock samples to describe some of these common metrics. 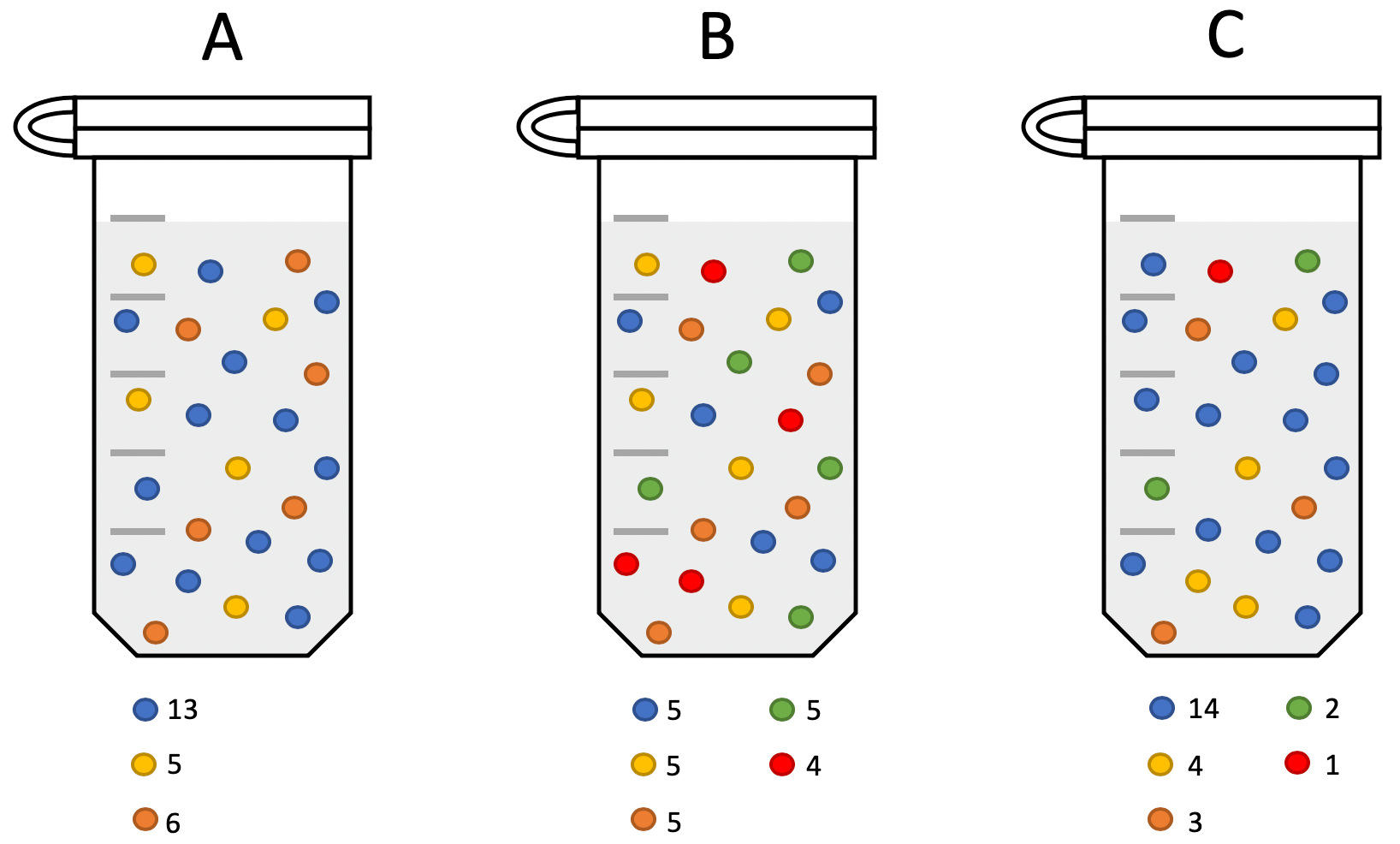 This is the most simple alpha diversity metric. It just counts up the number of different taxa you observe in a sample at a given taxonomic level, usually species. You may also see "observed species" or "observed OTUs" in some analyses, or perhaps other taxonomic levels. In our example above, sample A has 3 species, whereas samples B and C each have 5 species.

From this, we find the Shannon index for our above samples:

You can see that the evenness of the abundances of the microbes in sample B has led to an increased diversity compared to sample C, even though they have the same number of species. Sample C is dominated by one species in particular (blue), making it less diverse.

In our example dataset:

The Inverse Simpson Index is another derivation of the above Simpson index, calculated as:

In this case, our examples show:

The above metrics consider the number of different species observed, and some consider the abundances at which those species are found in the sample. However, if all of the species you have observed are from the same genus, for instance, your sample will not have as diverse metagenomic content (or different genes) as another sample with the same number and abundances of species, where the species come from many different genera, or from different branches at any other taxonomic level. Phylogenetic Diversity (Faith's Phylogenetic Diversity; PD) is the sum of branch lengths between the observed species on a phylogenetic tree.

Usually, the deeper you sequence or sample your data, the more species you'll observe, until such a point as you have observed all of the species in your sample. We often see researchers use this observation to give themselves an idea of whether or not they have sequenced their samples deeply enough. Rarefaction curves help with this. Researchers rarefy (sub-sample) their sequence data or reads for a sample to multiple different depths, calculate the alpha diversity, and plot how the alpha diversity changes with increasing number of reads. Using this approach, you should see the diversity level off eventually. One caveat of rarefaction curves is that, due to sequencing error, you can see artificial inflation of alpha diversity with sequencing depth. Our Targeted Loci Database includes post-classification filtering to correct for this issue.

Most researchers will examine alpha diversity to determine if there are major differences between two populations or groups in their data set, or if there have been major changes within a group over time. One example of this, which you can see in our blog post, examines the microbiota of infants from three countries. We plotted the species richness ("Chao1"), Shannon, and Simpson diversities for these three groups, below. 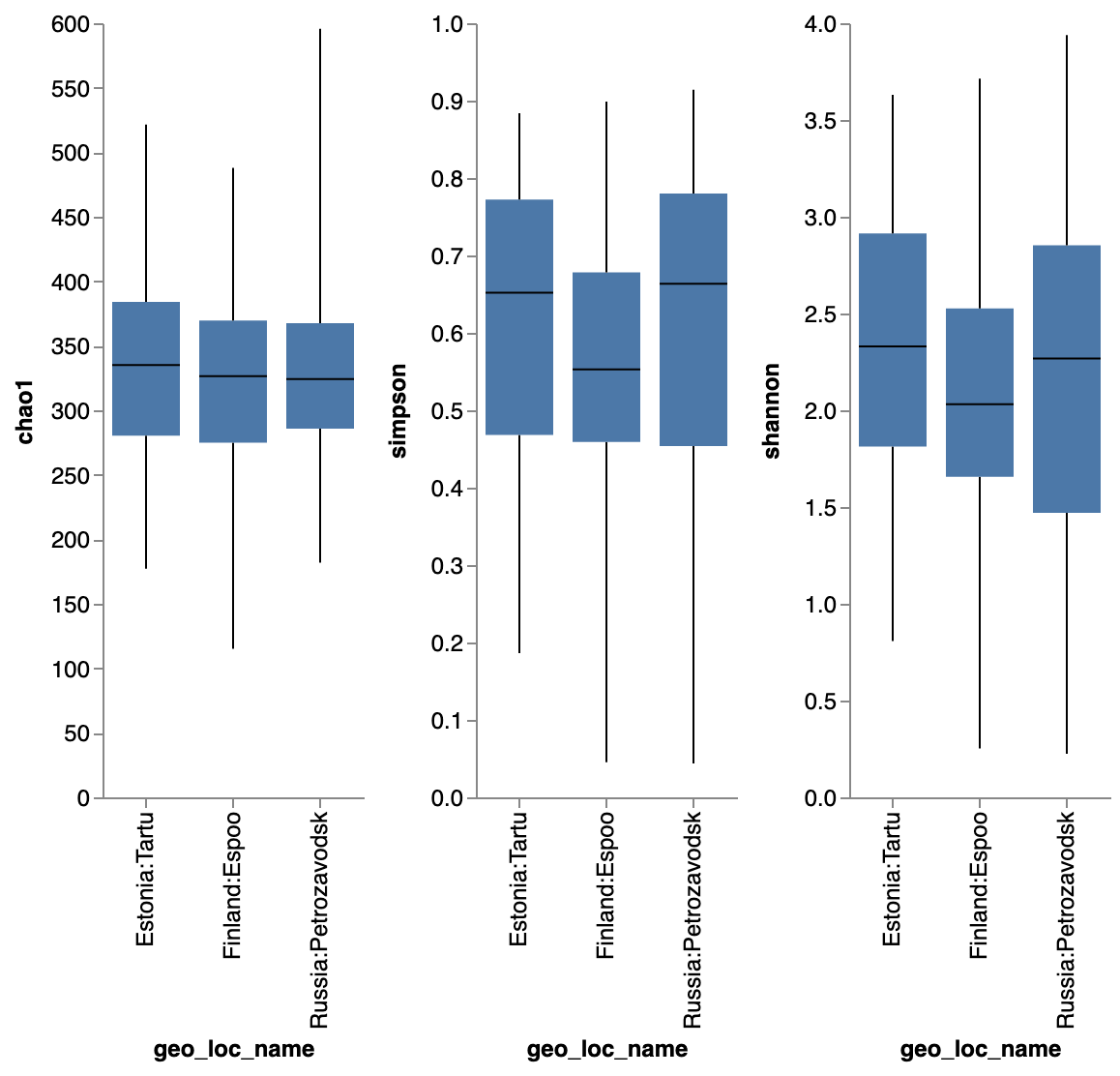 The Chao1 Index indicates that the three groups have very similar numbers of observed species. However, both Simpson and Shannon indices hint that the microbiota of the infants from Finland may have a less even spread of abundances than the two other countries.

This is a common "first look" at the microbiome, giving an idea that there may be some differences between these populations. These differences are quite small, with large overlaps. Statistical tests would give further insight on these data. These tests could be as simple as a t-test if the data come from a normally-distributed population, or a Mann-Whitney test if not. Microbiota samples often show differences due to the age of the participant, or other confounding factors, which could be accounted for by using linear modelling.

Alpha Diversity through One Codex

We've made it easier to examine alpha diversity within the One Codex platform. Using the Compare Analyses tab, you will find both the Simpson Index and Shannon Index under the bar plot for each sample. These are calculated on the taxonomic rank you have selected to plot, so if you choose to change the plotted rank, you will see these indices change accordingly.

For our users who are comfortable with scientific computing in Python, we have also made it possible to calculate alpha diversity using the onecodex python library in our Notebooks application.

You can calculate the alpha diversity for your samples with this command:

The metrics we've made available for you include shannon, simpson, and observed_taxa. By default, these metrics are calculated on species-level abundance data. However, you can choose to calculate at a different taxonomic rank, such as:

You can also generate box plots for your metadata variable of interest, like those shown above, using this command:

Take a look at our Beta Diversity article to see some of the other commonly-used microbiome analyses and metrics.